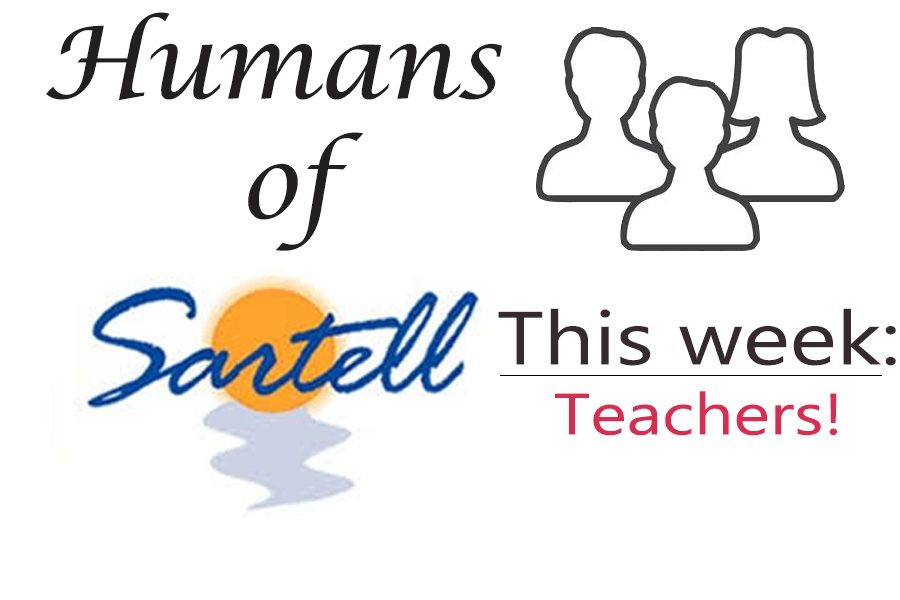 This weeks Humans of Sartell consists of SHS Teachers! 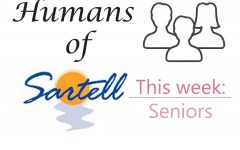 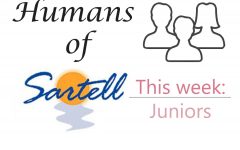 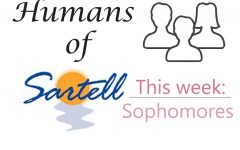 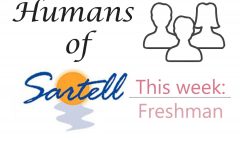 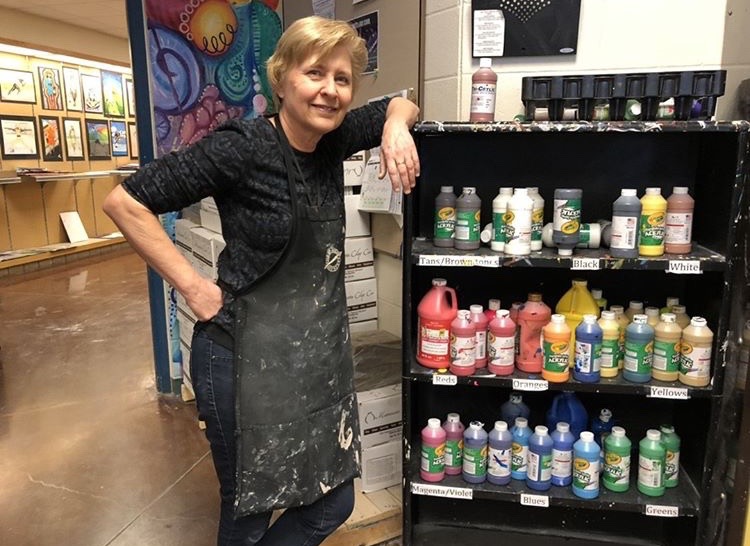 Mrs.Rollings standing next to one of her many collections of paints.

In the art room, decorated with brightly painted walls and clay covered floors, Mrs. Rollings shared some of her thoughts about her lengthy teaching career. Although she hasn’t been teaching her the longest, she is still one of the most senior veteran teachers.  Mrs. Rollings started all the way back in 1995.

Over the years Sartell has changed and Mrs. Rollings believes that, “the student body is so much larger, when I started here class size ranged from say 80-120. It was very easy to know each and every student in the class.”

Mrs. Rollings was asked about her first year of teaching at Sartell and what her experience was back then.

Mrs. Rollings shared one of her most memorable moments:  “My first job was in a rural farming community, and on Halloween, I went home to Mankato where I lived… and I came back and some of the kids had spread liquid manure on my porch steps, and I was horrified, I did not grow up on a farm. I told the principal about it and his reaction was ‘Well that’s good they like you, they’re just having fun’.”

After a bit more thinking, she added:  “I cried a lot my first year.”

Every teacher has some pet peeves when it comes to students, and Mrs. Rollings exposed a few of her own, “‘I didn’t have enough time’ because every person in the class has the same amount of time; it’s how they choose to use it. I’ll give you another one, ‘I’m a perfectionist so I didn’t get it done’, in my opinion, that’s a ridiculous excuse.”

Mrs. Rollings also shared some things that she enjoys doing in her free time or on the weekends, “I really enjoy painting, I love ceramics as well… those are things I like to do for art. I really like my dog, and I like to walk my dog. I really enjoy gardening which is so typical but I like it. I like being outside as much as I possibly can because I love the sun.”

Mrs.Rolling’s idea of what she would like to do after retiring gets her dancing, “I have 9 quarters left of teaching, I will graduate with this year’s sophomores. I have my retirement home waiting for me in Arizona… all the teachers know about that because I talk about my retirement home all the time.” 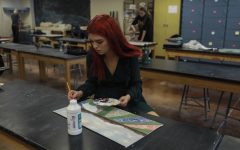 Greta Teich: the aura, the vessel, the conscience 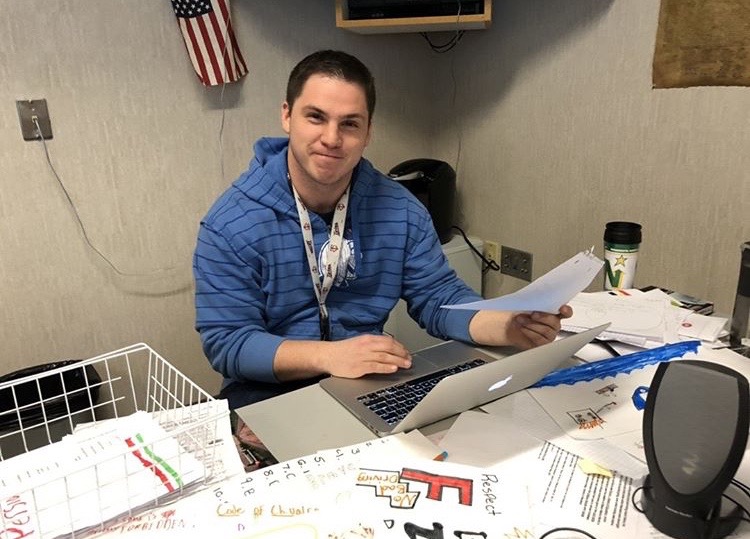 Mr.Minder sitting at his desk during what he loves, anything History.

Next was venturing into the social studies wing of the school, and into a bustling room of sophomores learning about world history. There, one of the schools newest teachers, Mr. Minder had some things to say. He’s been teaching for about four years, and recently joined our Sartell staff at the beginning of the year.

Mr. Minder shared some of his first impressions of Sartell, “Here in Sartell being right next to St. Cloud there’s a lot more things, I’m happy to be next to a Target again which is nice.” When talking about the students he’s had in class so far he said, “They’re a lot of fun, we’ve been able to do a lot of fun things… the kids I can joke around with so we have some fun there.”

Outside of school, Mr. Minder has a pretty normal life, “I have a little puppy, so I spend a lot of time with her. I do a lot of coaching. I’m the football coach here, and coaching baseball this spring. I still play baseball in the summers and I’m still looking for a league out here.”

Mr.Minder’s first year of teaching had many crazy stories,  “I had a kid who sat in my class for over half the period, and it turns out he was in the wrong class. I introduced everyone, and said I was the World Geography teacher and I mentioned World Geography like eight times and about halfway through he looked up and went ‘wait this isn’t US History’.”

Everyone has at least one weird talent and Mr. Minder can snap his toes.  We were immediately intrigued but unfortunately, were not able to get a video because a World History class was not the place and time for toe-snapping.

Every teacher has a pet peeve, and Mr. Minder is no exception, “My number one pet peeve is definitely getting asked the same questions over and over again. Luckily I’m at the high school where it’s not as common as at the middle school. Or when kids don’t read the directions.”

Mr.Minder’s idea of his perfect retirement plan consists of, “hitting the lottery at 30 and subbing a little bit.  I would love to travel, I haven’t had the opportunity to travel a whole lot and it’s weird being a social studies teacher and I teach all about these areas but I haven’t actually been there, so I’d love to visit all the places that I’ve taught about.” 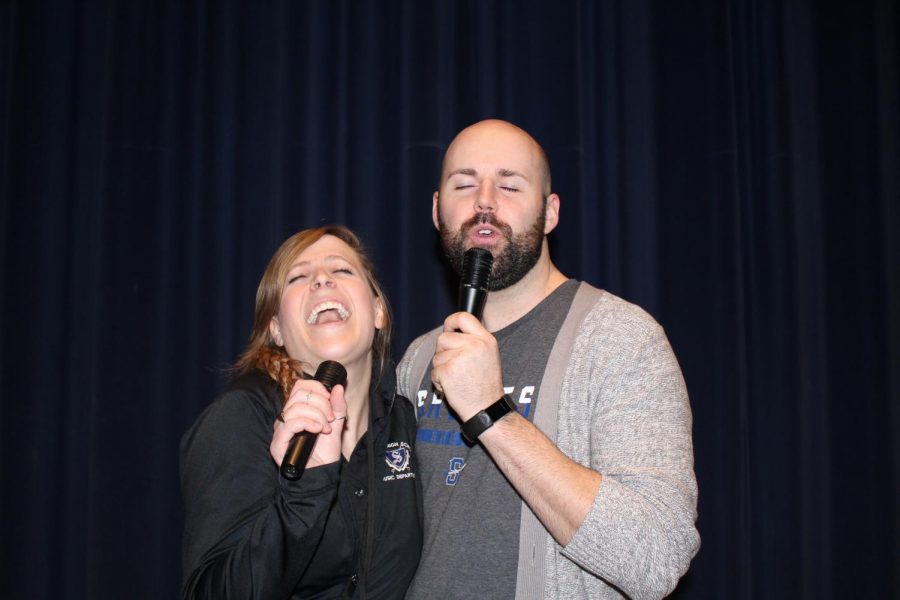 This weeks Humans of Sartell teachers, Mrs. Richards and Mr.Nordhues

The next stop was the choir room where we sat down with Mrs.Richards the choir director. Mrs.Richards is one of the many new teachers that was hired within the last two years.  Before working at Sartell she worked in Redwood Falls, MN for five years teaching 5-12 grade choir, along with teaching in Arizona for two years.

One trend that she wished would come back during her high school years is flared jeans and hip huggers. Everyone has some type of weird talent and Richards weird talent is, “I can whistle really weird.” Unfortunately, we were unable to get a video of her talent.

Mrs. Richard’s has many out of school hobbies: “ I love to play video games and just games in general… The game that got her hooked was Skyrim.”  Being a choir director, but also a gamer takes it to a whole different level, but it doesn’t stop there. Richards also loves to paint for fun and also creates her own earrings! “I’m learning how to make feather earrings now.”

Every person has a pet peeve but when it comes to students Mrs.Richards pet peeve is, “ When I give class time to do something but it ends up being late or not finished… or when I have to repeat myself over and over again.

Richards’ first year of teaching  had their hiccups but in general, it went fairly well, “It was a whirlwind.”

She also said, “I wanted to look older than 22 so I cut my hair fairly short.”

Richards later added, “Your first year of teaching is all about yourself, ‘like I’m just trying to survive and figure out what things are’… College teaches you the content but not the communication skills, parent emails and small this & that things.”

When Richards was student teaching in all ninth-grade school she realized that, “I loved ninth grade… I think that’s when I realized I like ninth grade, we seemed to click.”

Mrs. Richards idea of retirement consists of, “Ah! I have no idea…I haven’t even started my life yet.”

The following day Mr.Nordhues sat down by the piano after a long day of school/teaching. He has been working at Sartell High School for awhile now:  “This is the 8th year that I have been here, I worked at Foley church for a year along with the Saint John’s Boys Choir.”

Some hobbies Nordhues has out of school consists of “traveling, trying new foods, playing volleyball, softball, and hanging out with friends.” He also has done some pretty cool paintings as well.  After a few seconds, he added, “I love biking… not motorcycle biking just riding a bike.”

After a few laughs, Nordhues shared his pet peeve about students like every other teacher which is was having to repeat himself multiple times in a row. Nordhues’s first year of teaching was stressful, “ I remember walking out of class a number of times because they were so mean, those ninth-grade girls, I was so scared of teaching them everyday… But in general it was fun but it took time to connect with them.” He loved his student teaching experience because the teacher he shadowed also worked in the elementary school so he got to work with K-12.

Lastly, Nordhues’ retirement plans consist of, “ I probably would be involved in music stuff, I would like to think that I will be a better solo ensemble judge.. I would like to also be traveling and do music workshops… Oh, and read, I love reading.” 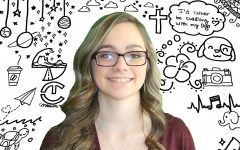 I have lived in Sartell for 4 years now, and I am a senior at Sartell High school. I have a tenth-grade brother who attends SHS and three other siblings... 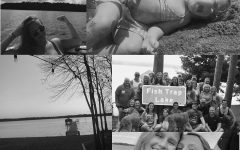 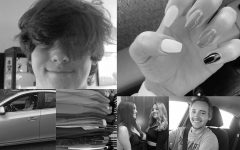 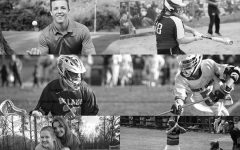 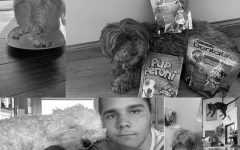