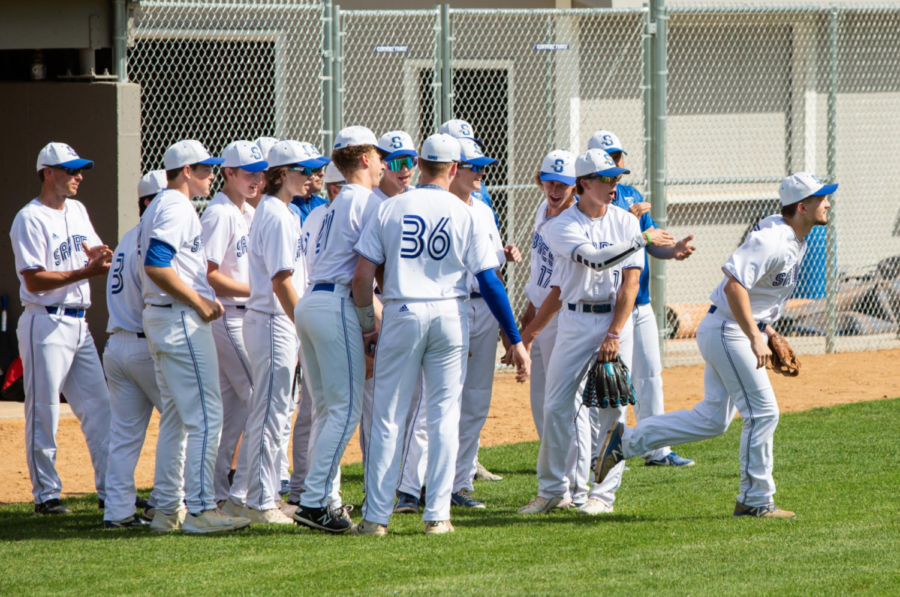 Sartell Baseball comes out swinging at tonight’s playoff game with a tight 8-7 win over Little Falls at Sartell’s home field. Sartell and Little Falls gave fans an exciting game with a win for Sartell in the bottom of the 7th inning. Going into Sections, number one seed Sartell took on the last seeded Little Falls for a double elimination game.

Both Kent and Henrichs contributed two big hits for the Sabres with Henrichs closing out the game with a walk off single. They however were not the only players to get the crowd on their feet, Stephen Brinkerhoff stood out with an exciting hit in the 4th inning. Just shy of a home run, Brinkerhoff’s hit bounced off the fence into the field as he contributed to the eight run win. Prior to the game, when asked what Sartell needed to do to win this game Steven simply replied, “hit the ball far”, and he did just that.

Not only was he a stand out hitter but also pitched his fair share of strikes alongside Senior Chase Heying and Junior Jalen Vorphal. Pitching in purple for Little Falls was Junior Zachary Gwost. Catching and batting for the Sabres the length of the game was Concordia St. Paul baseball commit Jack Greenlun. Greenlun prepares for each game with an extensive stretching routine as he states, “I do lots of stretching and I have a separate pre game stretching routine.”

With a high stakes game, both teams played hard through the last inning as it was tied 7-7 until Henrichs brought it home with a walk off single for the Sabres. The Sabres continue with a win-loss record of 18-3 and will face off against Detroit Lakes on Thursday at 4:30.