A deep dive into conversion therapy. 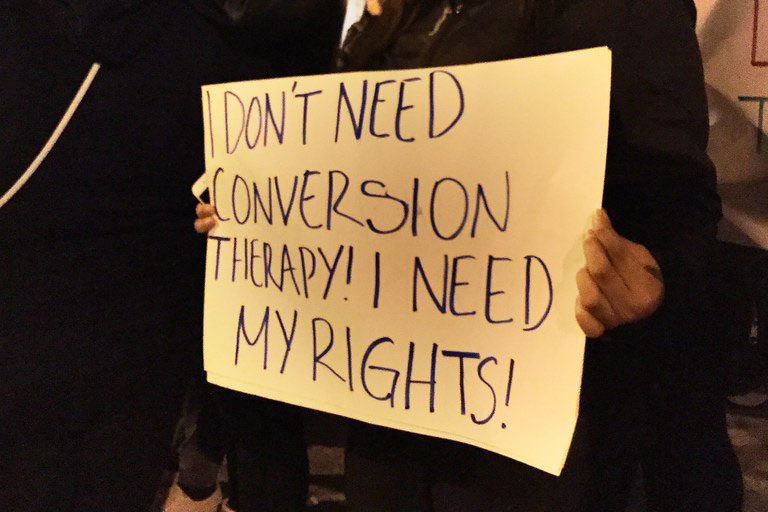 "I don't need conversion therapy! I need my rights!" by ninachildish is licensed under CC BY-ND 2.0

Conversion therapy is a practice that is receiving widespread criticism.

Conversion therapy is practiced in many ways. Ranging from counseling to actual torture. The more painful methods of conversion therapy use Pavlovian conditioning to make patients associate their sexual orientation with something negative or painful.

Samual Brinton is an activist and survivor of one of the more malicious conversion camps located in Iowa. He describes it as such: “Physical therapy was my hands being tied down and blocks of ice being placed on my hands. Then pictures of men holding hands would be shown to me so that I would associate the concept of [the] ice with a man touching me.”

Brinton’s “treatment” greatly increased in intensity during what he calls the “week of hell.”  Samuel describes the “week of hell” as “tiny needles being stuck into my fingers and then pictures of explicit acts between men would be shown and then I’d be electrocuted.”

In the US, 26 states, including Iowa, have no bans or restrictions on conversion therapy for minors. In these states, it is considered a legitimate practice. Because of the lack of restrictions, children are being abused or tortured like Samual Brinton.

Despite the massive lengths some will go to convert children into heteronormativity, conversion therapy has not shown to be effective. Outside the US, Brinton’s experience is dwarfed in comparison to the treatment that some children face in other developed countries.

In 2013, three South African boys had received “treatment” that resulted in their deaths. One of the boys (Raymond Buys) was severely malnourished, had his arm broken in two places, and suffered multiple burn wounds. Buys made it out of the camp but died after spending four weeks in the ICU.

Conversion therapy is an ineffective and inhumane practice that needs to be abolished to protect predatory religious and non-religious organizations from torturing children.