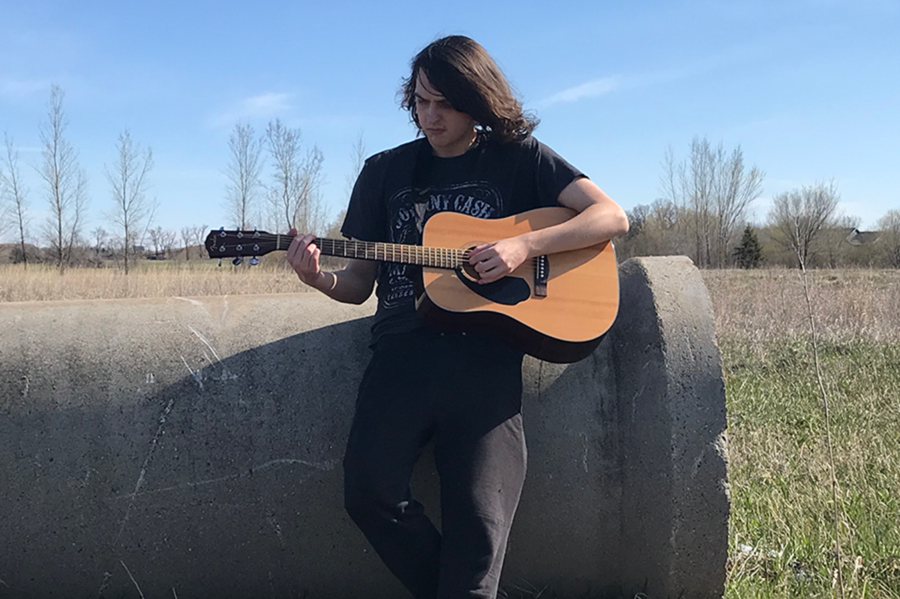 I am playing guitar in a field near the Coborns on Pinecone.

The 2020s are looking to be one of the most tumultuous times since the 1960s, and with those tumultuous times comes music, film, art, and cultural landmarks that reflect the times. Many artists arose during this time such as Bob Dylan, Joan Baez, and Phil Ochs, and other older artists resurged into popularity such as Pete Seeger and Woody Guthrie, who all helped spread the messages of freedom, equality, and peace that dominated the 1960s.

So what about right now? We haven’t seen many new artists arising to express their views about the current events that are going on around the world, about climate change, about racial justice, about the rise of right-wing populism in America, about Covid-19. Maybe it’s just who recording studios are picking up or if it’s the current musical culture, but there’s a lack of topical songwriters and singers right now.

However there are a few people right now who are writing songs and accompanying these songs with either a guitar, a banjo, or some other form of instrument or instrumentation, and one of those people would be me. In the traditions of Woody Guthrie, Pete Seeger, Phil Ochs, and a lot of other old folk singers, I take a look around the world about what’s going on and then write some music to express my feelings on it.

I started writing songs about a year ago when I began learning guitar. As I started learning guitar I began getting a lot more familiar with song structures and music theory-type subjects, and as I figured more of that out I came to realize that I too could begin writing songs about whatever I want with an easy two, three, or four chords. This opened up a whole new world to me as I began to write down song lyrics and attempted to put some lyrics to them.

Here is a video of me playing an old folk song “Water Is Wide” on guitar.

The songs I write usually have three characteristics: they are topical, they are straight to the point, and they usually have some form of aggression written into them. There’s a lot of things that are currently going on in this world that make me rather angry, and I don’t feel like filling a song with metaphors and complex language is productive in expressing my feelings. So I usually will just write what I think into some form of rhythmic pattern and then go from there. It’s a rather simple formula, but it works well for what I do. There are some songs however where I don’t get political, such as a song I wrote called “Beer Drinking Blues.”

After getting some lyrics written, I go to write music for them. Given my still somewhat limited guitar knowledge, I usually just figure out some chords and a strumming pattern. Coming up with chords is a rather simple task, as I just need to look in a key and pick the three major chords from a key and throw them in there when it sounds good. I then will just come up with a melody that fits the chords and, boom, that’s the music process done. This is probably the least formal process of my songwriting experience, but it has let me make some songs I am pretty proud of.

Where do I hope to go with my music writing? I would like to start performing things live once the pandemic starts easing up a bit more, but given my limited options here in the St Cloud area, I probably will be going down to Minneapolis or St. Paul to find gigs. I also want to go to some protests, union events, or other organizations such as these and play music to help promote the causes being argued. After all of these events, I then hope to get noticed and make at least one album in my life of politically charged folk music. I don’t really have any goals of becoming famous off of these songs, I just want to be able to say what I want to say and have a few people listen to me.

So I don’t think a whole new folk music movement will be rising again soon, but I do feel that topical type songs will become popular once again soon, and I hope to join in that tradition with my music. There’s a beauty in being able to express yourself and your opinions through music, and for me, it has always been the best way to do so.