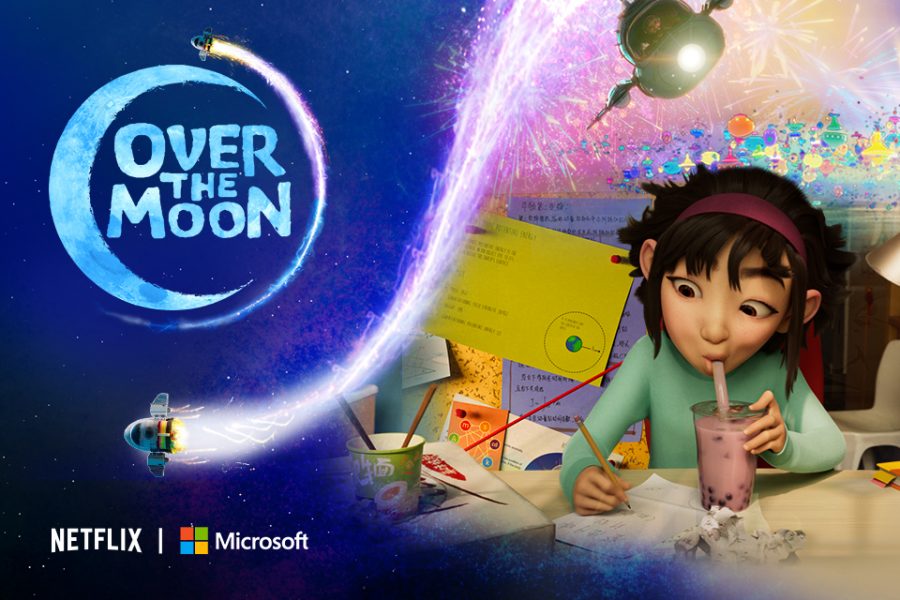 Fair use photo from Netflix

Over the Moon is a sweet animated film about a child understanding life a little more.

Over the Moon: Netflix reviews

Netflix has once again provided a beautiful, family friendly show that is pure entertainment for myself and my family. I found the movie wholesome, the art was beautiful and definitely had a beautiful message.

The movie is set in China. The main character is “Fae Fae,” and she received a bunny when she was younger named “Bungee.” Her parents owned a shop; and it was apparently quite popular, especially around their festivals. They handmade all of their cakes and were shown to be a happy family.

Over time we see the mother of Fae Fae deteriorate until the family is seen in black clothing to indicate that she died. The family spends time mourning and trying to move on with their shop, not trying any new mooncake recipes. Bungee is Fae Fae’s best friend, and Fae Fae is seen as the top of her class. One day her father brings home a new woman and her son.

The new woman makes Fae Fae uncomfortable; she assumed it would just be her father and herself for the rest of time. At the family gathering that night, they got into an argument over a goddess of the moon and a prominent figure in the movie “Chang’E” who is a beautiful goddess who got forced away from her lover and now lives on the moon in sadness.

Fae Fae decides that Chang’E is what she wants her father to act like, but if no one believes in her, how is her father going to be like that. So Fae Fae starts on her mission to build a rocket ship. She spends many nights trying and failing to figure out how to. She eventually builds it and figures it out with help from her teacher pinning her rocketship drawing on the wall and finishes it.

While on her way to the moon (with her bunny Bungee of course) Fae Fae’s rocketship starts going down and she didn’t know why until she saw her fathers lover’s son, Chin and his frog. While the rocket ship was falling back to earth two spirits take her to the moon (after playing around for a few moments) and then we are introduced to the goddess “Chang’E” who is singing a song about being extra-luminary.

Chang’ E makes a challenge to find a gift to bring her dead husband back, Fae Fae was supposed to have brought it however she didn’t know what it was. A good portion of the movie was used to find the gift and not being able to find it. Chang’E supposedly changed from the kind goddess she once was. We meet a glow worm who was once part of the court of the moon goddess but a song got him banished.

They find the gift in a mooncake Chins mother gave Fae Fae and she rushes to make it on time, Fae Fae just barely makes it and we meet Chang’Es’  husband. He disappears and tells his wife to move on. Chang’E finds herself in a depression and Fae Fae tries to help, only to fail and find herself in a depression about her mother. Chang’E tells Fae Fae to move on, and it sort of helps Chang’E, along with help from the glow worm from earlier.

Fae Fae goes back to earth with no proof of the moon goddess; however, she is now ready to move on and allows this new woman into her life and allows Chin to be her little brother.

My thoughts on this movie is that it is wholesome. I like the messages of moving on eventually and finding your way through the sadness of loss. It had beautiful art (I could see every strand of fur on the bunnies) and it certainly had an adorable ending.