The 21st ranked Minnesota Gophers were defeated by the 18th ranked Michigan Wolverines in a decisive loss in Minneapolis by a score of 49-24.  The Gopher’s were playing without some players in key positions and it showed up time and time again during the game.  They were without a starting guard, linebacker offensive tackle, and their place kicker and punter.  The Gopher coach, PJ Fleck, didn’t say why the players weren’t in the lineup but television announcers and many fans assumed it was due to Covid-19.

The Gophers were the first team to score after blocking a Michigan punt but the Wolverines quickly came back when running back, Zach Charbonnet ran through a confused Gopher defense for a 70 yard touchdown. Minnesota quarterback Tanner Morgan spent much of the evening running for his life as the Wolverines defense ran through the Gopher offensive line that resembled a poor high school team.

Morgan completed 18 of 31 passes for a total of 197 yards.  This included one touchdown and one interception. Wolverine quarterback Joe Milton had an outstanding game and kept the Little Brown Jug, the oldest trophy in collegiate football, in the hands of the Michigan Wolverines for the fourth year in a row.

The Los Angeles Dodgers blew a 7-6 lead on Saturday night when the Tampa Bay Rays were able to pull off a miracle comeback in the bottom of the 9th inning when the Ray’s Brett Phillips hit a single that brought in two runs to even up the series at two games apiece.

Phillips had not played in the last 17 days and had been warming the bench for the Rays up until he was called in to pinch hit in the 9th inning last night.  Both teams traded the lead back and forth throughout the game until Phillips stroked his game winning single.

After his big hit, he ran around the field with his arms stretched out like an airplane as his teammates tried to catch and tackle him in a wild victory celebration.  The series is all tied up 2-2 with the next game to be played Sunday night. 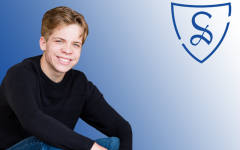 Christian ('21) is a senior at Sartell High School who loves to eat food and travel. After high school, he plans on going to school to become an engineer....