Is Cobra Kai the king of Netflix? 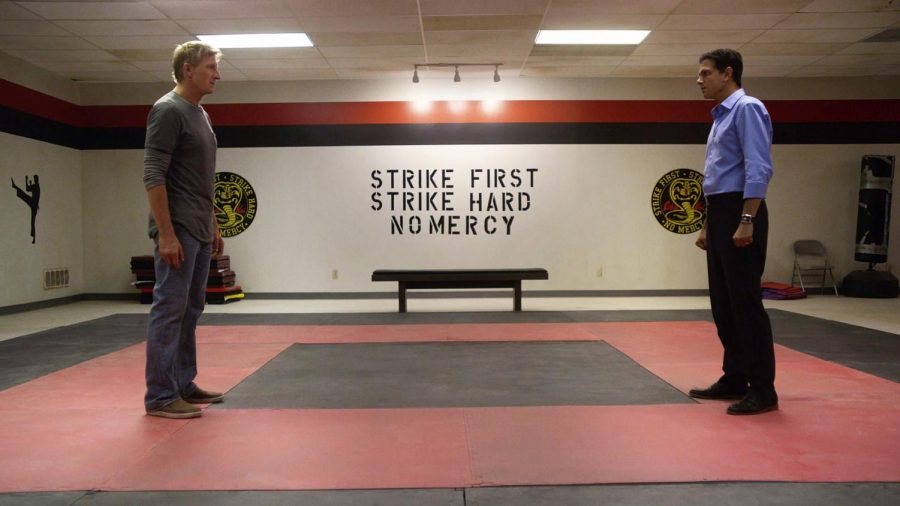 Fair Use Photo Via Netflix

Johnny Lawrence and Daniel LaRusso find themselves in a familiar situation on the karate mat.

In a survey of Sartell High School, of the students who responded, 60% have already viewed the show. When asked to rate the series on a scale of 1 to 10, the majority of students rated it at a 10. A big factor in why people liked the show so much was the sense of nostalgia, as it reminded them of the original Karate Kid movies. Sensei Johnny Lawrence looks to be the favorite character for most students, but if you saw the original Karate Kid movie, you might change your mind!

Released on May 2, 2018, Cobra Kai is an action comedy series based on the original Karate Kid movies, and Netflix acquired the series from YouTube in June 2020. The show right now has two seasons, each containing 10 episodes, and sometime in 2021 season three will be released (date still yet to be determined).

The show takes place 34 years after the 1984 All Valley Karate Tournament, and a washed-up Johnny Lawrence seeks revenge by reopening his notorious Cobra Kai dojo, and this resumes his rivalry with a now wealthy Daniel LaRusso. You can click here for a plot overview of the series (it does contain spoilers so you have been warned!).

Personally, the show started off a little slow, and I was skeptical about continuing to watch it. But, I decided to keep viewing the series, and I’m so happy that I did. The show picked up speed quickly and now it’s hard for me to take my eyes off the screen. Cobra Kai is full of plot twists and turns, school fights, old rivalries, and new relationships. Flashbacks to the original Karate Kid movie are also incorporated in almost every episode. In my opinion, season two of the series is better than the first, and I can’t wait until season three is released. To me, Cobra Kai is a top five TV show of all time, and I think it is the 3rd best Netflix series behind Outer Banks and Stranger Things.

Cobra Kai in 2019 was nominated for eight awards, and the most well-known nominations were at the Emmys and the Teen Choice Awards. The two Teen Choice Award nominations were for the Choice Summer TV Star and the Choice Summer TV Show. The Emmy nomination was for the most Outstanding Stunt Coordination for a Comedy Series or Variety Program. Cobra Kai did win one award at the Rotten Tomato Awards, and it was for the Best TV Drama (aka the Golden Tomato).

If you’ve seen the original Karate Kid movies, chances are you are already familiar with the actors Ralph Macchio and William Zabka. But, if you haven’t seen the movie then I will clear this up for you. Daniel LaRusso is played by actor Ralph Macchio and Johnny Lawrence is played by William Zabka. The two actors are playing the same characters that were introduced in the original Karate Kid movie in 1984.