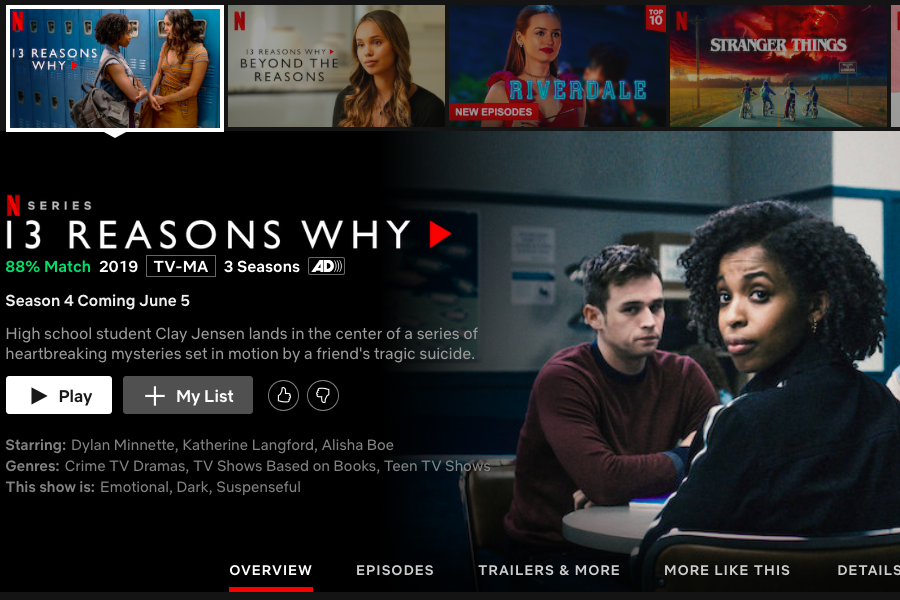 This is a screenshot from Netflix.com of the show's description and tags.

13 Reasons Why is a Netflix original show based on the book of the same name by Jay Asher, with its fourth and final season being released on June 5th. When the show was first released, there was much controversy surrounding it and criticisms from the public.

The synopsis of the story is this: Clay Jensen receives a package from Hannah Baker, a classmate who killed herself two weeks earlier. The package contains seven cassette tapes with 13 stories, 13 reasons why she decided to commit suicide, and Clay is one of them. Tapes in hand, he traverses the town he lives in while listening to find out what part he played in her life and her death.

Many mental health professionals had problems with the representation of mental health in the show and the aftereffects it had for some teens who watched it. In the month after the show released, there was a rise of almost 30% in the suicide rates for youth aged 10-17 in the United States, which was deemed statistically significant. This could be attributed to the fact that producers of the show disregarded the advice of mental health professionals telling them not to release the first season and the fact that they described and showed the way in which Hannah committed suicide.

The three-minute segment in the first season that depicts Hannah’s suicide was removed over two years after the premiere of the first season after Netflix had conversations with more mental health professionals. The scene was a cause for controversy for the show from early on in its release, with mental health groups explaining that scenes like the one in question could put teens at risk for copycat actions and triggering experiences. Both these things were seen soon after the show’s release.

A 23-year-old from Peru tragically ended his life and left tapes behind, seemingly replicating the situation that occurs in the book and TV show. In another case, two teen girls from California committed suicide just days after completing the show, both of which were battling depression prior to watching the show.

This situation could also be aided by the fact that Hannah’s final tape is addressed to Mr. Porter, her school counselor. Hannah sought help from him after a traumatic event, but he dismissed her and told her to move on. This demonizes the idea that if someone is struggling with something, they should get help from a trusted adult, potentially preventing them from getting the help they may need.

Another controversial part of the show was the multiple scenes that depicted violent sexual assault. Though many labeled them disturbing and potentially triggering for sexual assault victims watching the show, the scenes were not removed or reedited. Creator Brian Yorkey defended the inclusion of the scenes in the name of showing realistic stories of what young people may be experiencing.

Not only did mental health professionals have critiques of the show, but so did a few friends of mine. I decided to interview them, and their reactions to the first season and subsequent seasons in later years were less than positive.

The first person interviewed was my good friend Lily. She said she decided to watch the show because she knew it was controversial, and she wanted to know why. Lily mentioned that Hannah’s suicide felt glorified, making people think that “if they did the same thing, they might get back at the people who hurt them and get the love they may not have gotten otherwise,” which is clearly shown by the copycat actions taken by some after finishing the series. Lily stopped watching after the second season because she felt that the show was being made just to be controversial.

The second person I interviewed was my close friend Maddy. Maddy decided to watch the show because she had just finished the book when the TV show aired its first season. “I was young enough that I didn’t really see the problems with the portrayal of mental illness and suicide.” She ended up finishing the first season without many problems with it but mentioned that the show had made her uncomfortable. As it is a show about deteriorating mental health, this is no surprise. “It was shortly after [the first season aired] when I realized  how hurtful it could actually be.”

Maddy then went into detail about her experience watching the second season. After reading about the controversy online and reforming her opinions on the show, she still decided to watch the subsequent season, if only for the fact that she is a completionist. “Season 2 took me around 6 months to finish, simply because it negatively affected me so much.” Maddy discussed how the show put her in a bad state of mind and left her feeling disturbed.

At this point in time, Maddy has solidified her opinions on the show as something that should not have been produced. “I think it was a massive lapse in judgment that the creators and Netflix had.” She then went on to talk about the negative effects the show had on the mental health of teens around the globe and how she used this to justify her pessimistic view of the show.

Maddy, Lily, and many others were disappointed to find out that there was going to be another season produced, if only for the fact that there is no way to know how the show is going to affect young people who watch it until the damage has already been done.