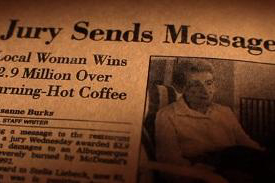 Photo via CAOC through the creative commons license

The elderly woman burned herself and then went on to face public scrutiny for wanting McDonald's to pay for her medical bills.

In 1992 McDonald’s faced a lawsuit because there was a mishap with the temperature of their coffee. A woman believed it was too hot, sued, and won the trial. People to this day use it as an example of people suing over stupid, pointless things, but the damages are much more severe than people believe.

served was around 180 degrees, which is hot enough to cause third degree burns in seconds. In an interview with RetroReport, she says that she remembers trying to get out of the car, while screaming in pain. She went into shock and was rushed to the hospital.

The doctor said he had never seen burns so bad. According to FindLaw.com, she had third degree burns across her thighs and genitalia, as well as deformation. She spent a week in the hospital, and the bills came out to be around $2,000. She wrote a letter to McDonald’s asking them to cover the bills and her daughters lost wages, but McDonalds refused to pay over $800. A McDonald’s employee testified that they had also gotten roughly 700 reports that the coffee was too hot and was causing burns, but they refused to do anything about it. Liebeck didn’t want to go to court, but McDonald’s refused to offer compensation for what had happened to her.

They eventually went to court and the jury decided on a fine of 2.7 million dollars from the corporation, but the judge reduced it to $640,000, which was still above what Liebeck initially wanted. McDonald’s also had to reduce the temperature of their coffee, in order to make it safe for customers.

The story has much misinformation spread about it, including the incident and the amount of money she received. She didn’t become a millionaire, she wasn’t driving, she even admitted it was her fault that the coffee spilled. It wasn’t a greedy woman looking for a quick payout, it was a woman who was traumatized and deformed from nearly 200 degree coffee.