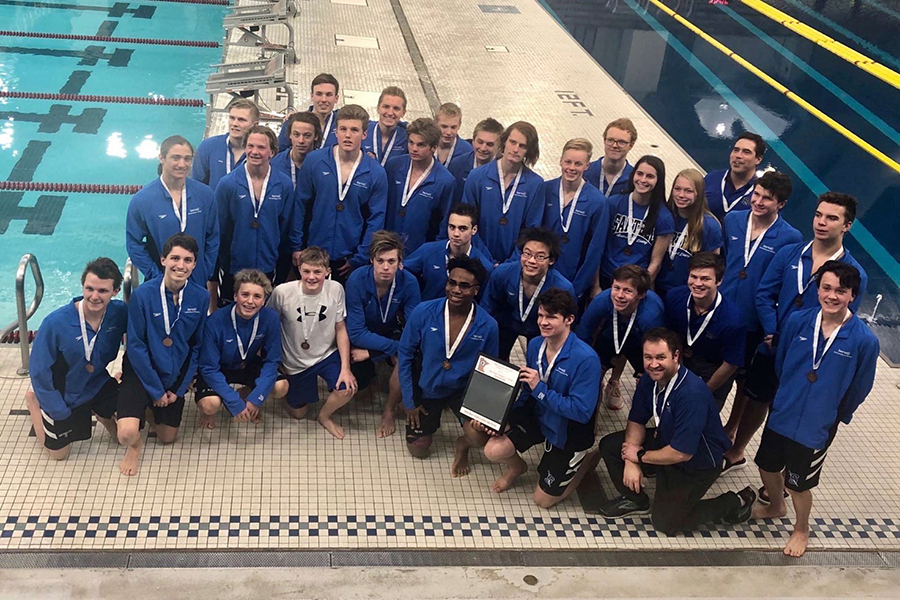 The boys' swimming team celebrates their victory and like being a cohesive team.

Their record for the season is 7-0-1. They have not lost a single dual meet. It was also notable that the team took first at the True Team Section meet.

When asked how the team’s morale is going into Conference and Sections, junior Jack Thomas stated, “It couldn’t be better. We are very excited!”

One of the things the swimmers love is hearing their fans cheer them on.  Unfortunately, not too many student spectators visit during meets, but the swimmers sure would love it if more would.

Senior captain Cooper Larson shared, “I think we should be getting more student fans at our meets because other sports with less wins do.”

The team has been swimming hard after school and even before school some days. At practice, the boys focus on their main strokes, but have to practice it all.

Cooper expressed pride for his team this season. “It’s one of the best seasons the team has had in awhile. We have all been working hard.”

The team has bonded and made some good memories this season. There have been many highlights in and out of the pool.

Jack stated, “My favorite memory from this season is getting third at True Team State.”

The team competed at True Team State at the University of Minnesota on January 25th.

Cooper shared that his favorite memory was “last year at state when we took second.” The boys hope the team can be as successful as last year, if not more successful.

In any individual event or relay, the top three finishers at the Section meet in Morris will  qualify for state. The state meet will take place at the University of Minnesota. Cooper and Jack both agree that Sartell has a good shot at making an appearance at state this year.

Go show support for the Sartell boys swim team at their Section meet on Friday, February 23rd at Discovery Middle School in Alexandria!