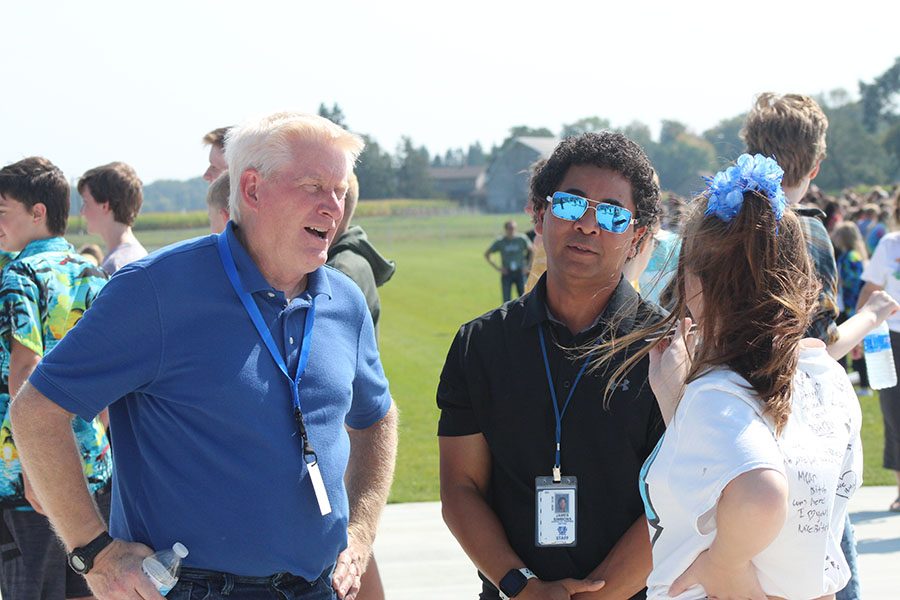 On Tuesday the 17th, the students of Sartell High School were at the school carnival as a part of homecoming week.

The carnival is an annual event, though SHS hasn’t actually had it for the last two years due to bad weather. Karrie Fredrickson, the Student Council advisor, explained that the carnival was “held on the south side of the building and it went from 2:00 to 3:10pm. There was food, drinks and some local businesses, like Upper Deck, who were giving stuff away.”  KCLD provided the music.

The carnival included more activities than previous years like a dunk tank, where you could dunk teachers, Minute To Win It, snow cones, bouncy houses, and much more. With all these activities, there were more opportunities to have fun and win prizes.

Mr.Phillips and Mr. Christe, Industrial Tech teachers, had their classes, Construction 1 and Metals 1, build a new human foosball game. Mr.Philips said, “The game was played in a bracket and the team that scored the highest won. The game was played with six-eight people per team.”

Students and staff all had thoughts on the carnival.

Vice principal, Mr. Peterson, said that his favorite game was, “the Dunk Tank. I mean come on, who doesn’t want to get teachers wet. But also human foosball, that one looks like fun.”

Mr. Peterson wasn’t the only one who thought that the carnival was fun. Mr. Simmons, one of the business teachers, said “So far I like it. I like to see the kids out actually doing something other than being inside the school.”

Students also enjoyed the carnival. Charlie Monson, a junior said her favorite game was, “Oistad’s Dunk Tank.”  Another student said her favorite thing was, “Watching the powderpuff football game, because it’s cool to see so many girls participating.”

Even though the carnival is supposed to be a fun event, some students had other opinions.

One student said, “The carnival should be held after school, and be an optional event so people can have class time to finish their homework. I would rather be doing homework than paying money to win a small piece of candy.”

This was a common theme among students. Some students interviewed had things that they did not like about the carnival.

Another student said, “The carnival should be held either inside or in the morning so it isn’t so warm, because it is too warm right now.”