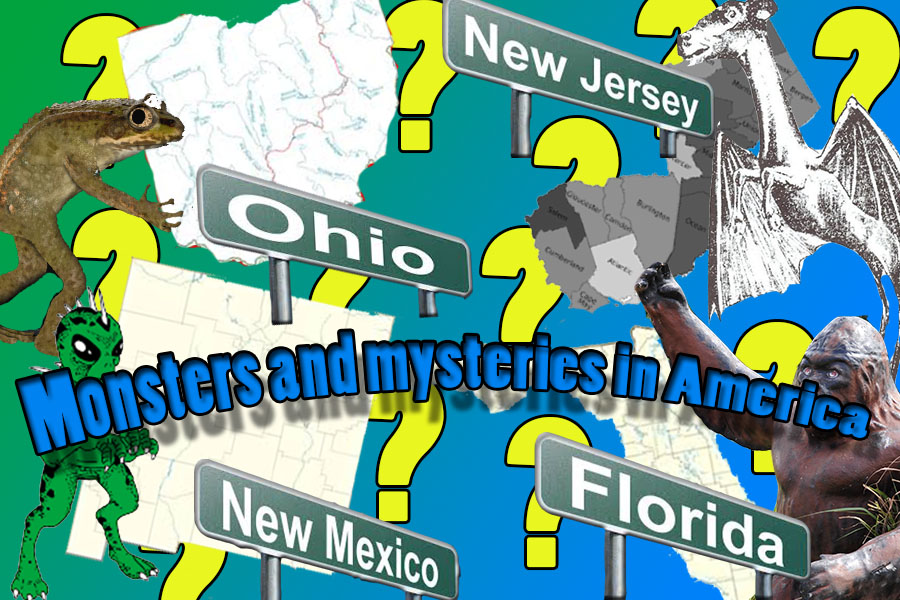 Over 2,000 species go extinct per year, and that is being conservative. There are some creatures that will never go extinct and those are the ones we hold in our imaginations.

The first sightings of the “Loveland Lizard” were allegedly in 1955 specifically in the month of May. People report that they see it late at night on deserted highways in Loveland, Ohio. An Ohio woman also states that a large creature in the Ohio River grabbed her while she was swimming in the mid 1960’s. However, the 1950’s were not the actual first sightings of this creature. Native American tribes of the area also have a record of a large reptilian “demon” that would kill their warriors. One tribe was the Shawnahooc who detailed the reptile as large and bipedal and this legend was passed down for generations, but when they were pushed away from their land, the reptilian demon stayed. There are numerous police reports that detail frightening encounters of this odd cryptid and the people of Ohio really do believe this creature exists in its lakes and rivers.

Florida’s Everglades are known for many things, but none more disputed than the Bigfoot- esque creature, the Skunk Ape. Starting in the ’50’s and ’60’s people began talking about the large, smelly being in the woods. No one is more dedicated to this legendary creature than Dave Shealy, who first saw the Ape when he was 10 years old. He believes that there are 7 to 9 Skunk Apes living in the Everglades currently. There is no collective legend of this creature, so it can only be speculated how people started believing in this. There are many “explanations” for the sightings of this creature one common one being that these people are just seeing a large smelly black bear, but people don’t like this explanation very much. Another huge point that is made by skeptics is that people are putting on hairy, smelly costumes and walking around the Everglades. No matter what anyone says, there is no way to change the minds of the people that believe.

This legend has a more morbid history than the others. According to legend, in 1735 a woman named Jane Leeds had 12 children and was pregnant with a 13th, before giving birth, Jane, nicknamed “Mother Leeds,” cursed the child. When the child arrived, shortly after birth, it sprouted horns, hooves, and a goat- like face and killed the midwife. Some believe that Jane was a witch and the child was that of the Devil himself, and others believe that after the child was born the local clergymen tried to exorcise the creature, but instead gave it wings and it went on killing local children. Witnesses recently have claimed that it is the size of a large horse and resides in the woods until nightfall and has a blood curdling scream that can be heard for miles.

The Chupacabra, named after its blood sucking habits has origins in 1995 Puerto Rico and has since moved to southern California, Arizona, and New Mexico. Legend has it that it is a mixture of a dog, coyote, wolf and an odd scaly creature created by accident in rural Puerto Rico. It is allegedly responsible for thousands of livestock deaths since its first appearances in the late 90’s. The Chupacabra is known to leave three puncture holes in its victims, draining them of all blood before mutilating them. Farmers are the most affected by this, and they are the most common demographic for sightings and believers. Various specimens and bodies of supposed Chupacabras have surfaced and have been tested, some come back with results that say that it is a coyote or dog that had a skin disease called mange, but others were deemed inconclusive. Regardless, if you see a strange dog on the side of the road in the southwest portion of the U.S, maybe think twice about picking it up.