We spent a good chunk of change on all of this make up but we are dedicated, hard hitting LeSabre journalists so we didn't mind.

For some SHS students, putting on make-up is a daily occurrence and for some, it’s just a once and awhile kind of thing.   Are you using the best brand for the money?  The two brands that caught our eye in Target were Loreal and Covergirl. We decided to try out some new things.  The four main things that we looked at was mascara, concealer, eye shadow and you can’t forget about the highlight! Did they all turn out good or did they turn out bad?  You’ll have to read on to find out our recommendations (Kaitlin Koch covered Covergirl and Olivia Brinkman covered Loreal).

Olivia took Loreal’s products to the real test and reviewed them; here are her responses.

The first thing that Olivia tried is concealer, and she felt that it did not cover up her imperfections very well. It was cakey even though she rubbed it in as much as it could be, it still made her skin look like she had makeup on her face and girls and boys do not want people to see that. For the skin color, it was way too pale which could have been our fault but the bottle looked like it was her skin color at the time. When she put the color on her face, it made her look like a ghost. The thickness was not an issue, it felt just right. The one thing that she really did like, was how the concealer applied and how the bottle was manufactured made it easy to apply. Olivia said that she disliked this product for many reasons and will not wear it again in the future.

The third thing that she reviewed was eye shadow. She thought that the colors were really pretty, and she liked the choices that they offered her in the palette. The eye shadow applied really nicely with the brush, she liked how she felt that she didn’t have to put much on the brush. She lightly dabbed the amount of eye shadow and it still applied really good. Olivia liked that the brush was really long; the fluffiness of the brush and even the tip was designed nicely for the eye shadows. She thought that the pigments of the eye shadows were very bright and stayed on the eyes for a long time without losing its color. Olivia said that she enjoyed this product from Loreal, and will use this again for future wearing.

The fourth thing that she took to the test was mascara. Everybody knows that mascara is a huge impact to brighten up your eyes and is very important to people that wear makeup. For the length, it made Olivia’s lashes very long and voluminous like the product said it would. This mascara did not have a clumpy effect to it; it was the right amount every time it hit her lashes. She said that she liked the wand.  She felt that it was pretty basic and there wasn’t much to it but it did its job alright. She overall liked the product, and in the future, she said that she will use it again.

It’s Kaitlin’s turn to take Covergirl’s products to the test and review them.

The first thing that Kaitlin tried was concealer. At first, when she put the concealer on, it looked darker than her skin tone but when she blended it in, it ended up matching. The quality of this concealer was a little watered down it felt like, but it showed up nicely when she was done applying. There was not much cakey-ness on the face, but every once and awhile you could tell that she was wearing concealer. This product felt thick and watered down, and was creamy but thick at the same time. The bottle was so confusing to adjust to.  You had to turn it to get the product out. It literally took 10 minutes to finally open it. The way you had to dab the product onto the face felt weird and not natural. Kaitlin sort of liked the product, but she will not use it in the future.

The second thing that she tried was the highlight. The highlight was glowing with shininess and stood out. It looked really nice on her, and she enjoyed it. The highlighter was very sparkly and made her make up look good with a nice touch of sparkle. It definitely lightened up her face, she looked glowy and just overall made her sparkle. The highlight stayed on for most of the day, at the end of the night it started to wear off a little bit. Overall, she really enjoyed this highlight and will wear it again sometime in the future.

The third thing that Kaitlin tried was eye shadow. The eye shadow didn’t apply very well. The brush was really old style and did not do justice to the eyes. The colors were pretty, but not very much to choose from. It stayed on for an hour or two and was very disappointing after that. It was not very pigmented at all; it was light and did not stay on as long as I thought it would have. Overall this eye shadow will not be used again. But if you want to go for a light palette with not much pigmentation, this is your guy.

The fourth thing that she tried was mascara. The wand of the mascara was really nice, I liked that it covered all the lashes in one swoop. This particular wand was made for no clumps, which is what she likes in a mascara. This mascara made Kaitlin’s lashes appear longer but did not give the full effect that she likes. I feel that if you apply more of this mascara, it will give you a more full effect though. Overall, this mascara will definitely be used quite often, because she really enjoyed this product on her eyelashes.

Hi, I'm Kaitlin Koch, and I am a person that enjoys life. I love long car rides and adventuring with my best friends. When I am at home I am watching One... 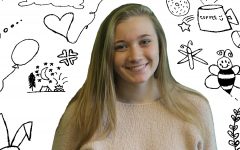 Hi I'm Olivia Brinkman! I am a senior at Sartell High School. Some things that I enjoy is going to grab a cup of coffee at Starbucks with my friends and...