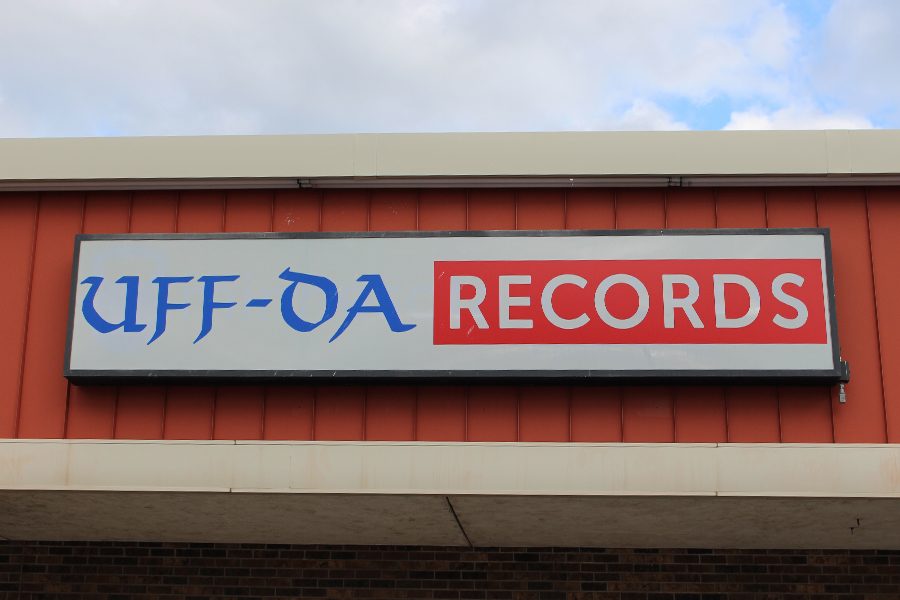 As I got out of my car in a particularly unwelcoming part of St. Cloud, I was greeted by a familiar large painted gnome holding a sign reading “velkommen.” A common phrase in my family, it means welcome in Norwegian. My grandma had a smaller gnome that sat on her doorstep.

As I stepped into the store, I was greeted by a tall man with a long beard and tattoos. He said hi and introduced himself as Jeff, and after hearing about him from my friend, I realized that he was the owner.

Jeff Pederson owns Uff-Da Records, a Minnesotan/Norwegian themed record store located in St. Cloud near Bravo Burritos and Arby’s on 33rd Street. If you haven’t visited his store yet, you’re missing out.

Jeff started Uff-Da to “fill a void” that was left behind after the Electric Fetus closed in St. Cloud in 2014.

“I kinda felt like, y’know, it was going to be a right time, right place kind of thing, and it just happened, like, fell into my lap basically. A friend of mine who ran a sports collectible shop… he called me out to help because he started carrying records, and he had no idea what he was doing with records. And pretty soon he just decided that he was going to leave town and concentrate on his two Minneapolis locations. And he said, ‘Do you want to run with it?’ and I was like ‘I guess?’. I just ran with it.”

After accepting his friend’s offer, Jeff was out for coffee with another friend when he was thinking about what to name his store. He calls naming it a “Eureka Moment.” Because of his Norwegian heritage, he decided to call his store Uff-Da Records, a common Scandinavian phrase. Uff-Da started out as a small record store in the Crossroads Center mall, but after the lease expired, they moved into their current St. Cloud location.

Jeff sells many different kinds of music, however, he tells me the most popular genres are usually 60’s British Invasion, 70’s classic rock, and 80’s metal. Another very popular type of music in the store is local music. Many people come in looking for local bands, and even though their music isn’t carried in vinyl, lots of people buy the CDs that the bands drop off. Most of the records, CDs, and tapes sold at the store are bought from walk-in sellers. Even though most of the music comes from the aforementioned sellers, Jeff does have his employees and some of his friends looking out at garage sales and similar things for any sort of music.

One of Jeff’s favorite things is having live performances at his store. This was another way that he “filled the void” left behind after the closing of Electric Fetus. Uff-Da was able to become an all-age venue for performances. There is a variety of music performed, from acoustic to metal, and sometimes even electronic.

Though owning a record store is a dream job, Jeff does face some difficulties, the biggest challenge being the accounting. Luckily, he has a few friends who are good with numbers. Another challenge is keeping the racks full of music. There is a huge table with CDs, a rack full of tapes, and many boxes full of records. As I mentioned earlier, the main way they obtain music is through walk-in sellers, and if people aren’t coming in to sell, the racks will slowly grow barer. I thought that competing with digital music would be a challenge, but Jeff says that most of the people that come into the store have a passion for music, so digital music hasn’t become a problem.

During my visits, I picked up four different albums. I bought “Waterfalls” (single) by TLC on cassette, “Under The Bridge” single by Red Hot Chili Peppers on cassette, 1984 by Van Halen on cassette, and Sgt. Pepper’s Lonely Hearts Club Band by the Beatles on CD. I bought these albums to take a look at the quality of what Jeff sells, and I was very impressed. I have some of the old tapes my parents used to listen to, and the sound quality is very poor due to the number of times they have been used. The tapes that I bought at Uff-Da, however, were very high quality. Any crackling that was heard actually came from my Walkman, which is very impressive for tapes that have been around since at least the 1990s. I’m not sure if quality testing is performed before purchase or how it would work if it did, but I have no complaints about any of the music I bought.

As I was leaving the store, I had mentioned to Jeff that my record player had broken and that I couldn’t play my favorite Elliott Smith record anymore. He then directed me towards the used record players in the front of the store. I told him that I know little to nothing about record players, and he offered to help me find which one fits me and my living space the best. He also let me know that if I find a used player that is missing parts that he could order parts into the store and help me assemble them. Though I couldn’t buy one at the time I was there, I appreciated the help a lot and could tell that he was genuinely interested in helping me find what I wanted.